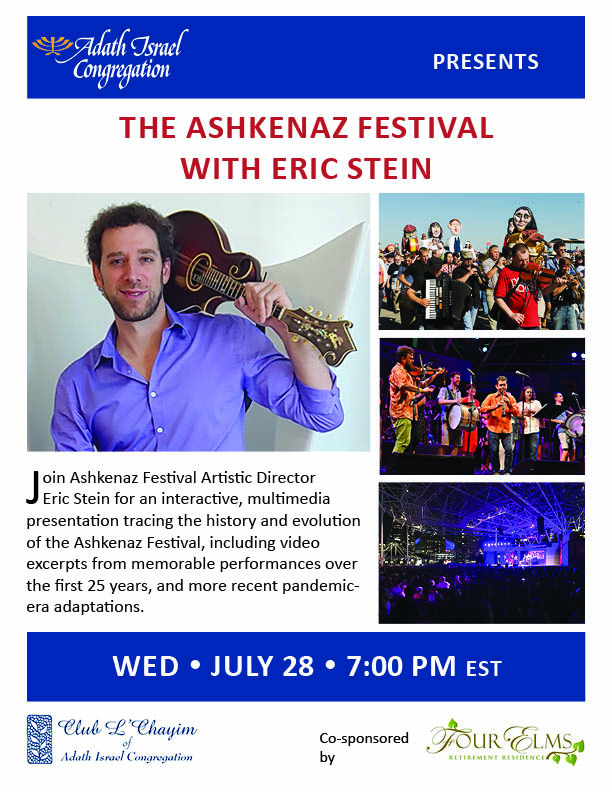 25+ Years of the Ashkenaz Festival
Founded in 1995, Toronto’s Ashkenaz Festival is North America’s largest celebration of global Jewish music and culture. This world-renowned, biennial event attracts an audience of over 60,000 people to a week of multidisciplinary performances in music, theatre, dance, film, visual arts, literature, foodways, and kids/family programming. The Festival usually features 80-90 performances with over 250 individual artists from across Canada and around the world. http://www.ashkenaz.ca/

Eric Stein
Mandolinist, bassist, bandleader, artistic director and producer, Toronto’s Eric Stein has been a prominent figure in Canada’s folk, world, and Jewish-roots music scenes for over 20 years. He is founder/leader of the innovative klezmer/balkan fusion group Beyond the Pale, with whom he has performed across North America, Europe, Brazil and Australia and released four award-winning albums. Eric also leads the Brazilian choro ensemble Tio Chorinho, is a member of the international supergroup the Ger Mandolin Orchestra, and has performed with a number of other leading world, folk and classical artists. Eric has served since 2006 as Artistic Director of Toronto’s Ashkenaz Festival, one of the world’s preeminent celebrations of global Jewish music and culture. https://www.estein.ca/