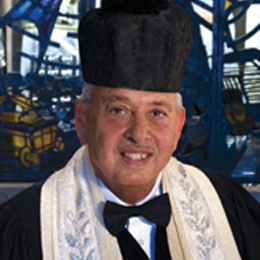 My life as a Cantor has given me a wonderful way to engage closely with adults and children via the medium of Jewish music.  I officiated for over 40 years, accompanied by a wonderful professional choir and as a Cantor I was able to be steadily immersed in glorious liturgical music and make lifelong friends with many wonderful congregants.

I was born in Brooklyn New York in 1937 and attended Yeshiva both for my secular and religious education.  On graduation I received a Bachelor of Arts, Bachelor of Religious Education, Master of Science and accreditation from the Jewish Board of Education of New York with licenses as both a Teacher and Principal.  I was a private cantorial student with the world-renowned Cantor David Kussevitzky. This background allowed me to work not only as a Cantor but also Educator, Principal even as a religious consultant for a film made for TV, “The fight for life”,

I came to Adath Israel in 1967 as the Senior Cantor.  In the early years I organized the synagogues professional choir.  And over the next 25 years I trained and conducted many hundreds of children who joined the “Children’s Choir”.

Over the years I led many student trips to Washington D.C. New York and Ottawa as well as thirteen family trips to Israel. Additionally, I was appointed for a three-year term as a member of the North York and Toronto Boards of Education and I served for three terms as the President of the Toronto Council of Hazzanim, organizing Concerts, and establishing the Toronto Cantorial Trust Fund.

I married my wife Linda, in 1965, we have three children; Risa, Shari and Jonathan and five grandchildren.  I retired from my cantorial position in 2009 and from the school in 2016.

Now I am the Cantor Emeritus and I can be visited at the Synagogue in my office.