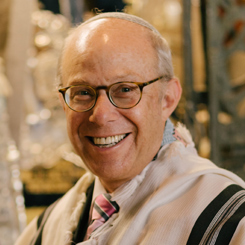 Being at Adath Israel since August 2003 has been a true privilege. Every day I feel a sense of excitement and dynamism as I interact with so many different members of the congregation, whether it is helping someone through a life cycle event, dealing with the challenges of daily life or helping people of all ages to share in the beauty of Jewish life. That engagement is what motivated me to become a rabbi.

I was born in New London, Connecticut, but I did not come from a religious or observant family. However, through my years at Camp Ramah, among other formative experiences, I slowly began to learn and become more involved in Jewish life. Prior to university, I was fortunate to travel with Camp Ramah to the former Soviet Union and Eastern Europe, meeting with refuseniks and seeing the remnants of Jewish life destroyed during the Shoah. This experience drew me even closer to making Judaism an integral part of who I wanted to be.

For this reason, I decided to attend the combined program of the Jewish Theological Seminary and Columbia University in New York City graduating with degrees in History and Political Science. My relationship to Judaism and my desire to bring my love of it to others compelled me to enter JTS for Rabbinical School where I was ordained in 1983. At the same time, because of my belief in the importance of working with people, I studied at the School of Social Work at Columbia where I received my MSW in 1984.

When I was at JTS and Columbia I met my wife, Lori, who is currently a coordinator for the Kosher Meals on Wheels program of Circle of Care. We are blessed with three children and a daughter-in-law who are all involved in various facets of Jewish life.

In addition to my rabbinate at Adath Israel, I am currently the Vice President of the Toronto Board of Rabbis, as well as Chair of the Christian Jewish Dialogue of Toronto. Over the years I have served as President of the Ontario Region of the Rabbinical Assembly, the organization of Conservative Rabbis.

I also believe that it’s important to be a part of the broader general community as seen in my many interfaith and Chesed activities over the years.  I have been very devoted to social justice concerns and have worked to engage others to perform acts of Chesed to try to bring people of different faiths together to create a more just world.

I’m always interested in talking and meeting you and your families and please feel free to be in touch!