My Rabbi (Teacher), My Friend 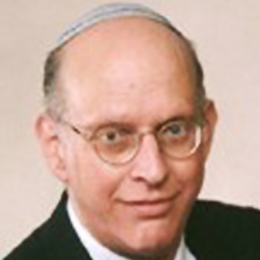 It is written in the Mishnah that there are two important relationships that each person must establish in his or her lifetime. One of those relationships is with a Rabbi (teacher) and the other is with a friend. This principle is stated in the Talmud, Avot, Chapter 1, verse 6. “Asei L’Cha Rav, U’knei lecha Chaver”. Make for yourself a Rabbi and acquire a friend. Although the verse contemplates different people filling the roles of Rabbi and friend, I was fortunate to find both in one person.

My first exposure to Rabbi Saltzman was in 1989 at a Torah study session that he gave on Shabbat afternoon at Mincha. At that time, the congregation was looking for a successor to Rabbi Schild. Rabbi Saltzman’s presentation was on the highest level, conveying a depth of knowledge in many areas. It was immediately clear to me that he would become our Senior Rabbi but knowing that brilliance is often coupled with arrogance, I wondered what our relationship, both personal and professional, would be.

Shortly after Rabbi Saltzman was hired, he moved into his office and we had the opportunity to spend some time together. He was dressed in tight jeans and high cowboy boots and wore a belt buckle that said “God Guts Guns”. I would soon learn that this was standard dress for him. He spoke directly and intelligently though often with language that was what some might describe as unrabbinical. I realized quickly that he was anything but arrogant and my concerns were alleviated.

As time went on, I realized that despite Rabbi Saltzman’s very public role, he was socially somewhat uncomfortable and almost shy. In retrospect, this stood in the way of him developing close personal relationships with some. Fortunately for me, we became close very early on. We developed a real comfort with each other, borne I think of an appreciation we each had for what the other did. Our common goal, from the outset, was the creation of a rich meaningful service and we worked together to reach this goal.

Rabbi Saltzman was not only open to input; he sought and welcomed it both in advance and after delivering a sermon. Likewise, I welcomed and valued his input on the musical aspect of the service. Rabbi Saltzman was an accomplished musician in his own right. He had a deep appreciation for Jewish music, Nusach, and enjoyed leading the congregation in prayer. His love of leading the congregation in prayer was almost as great as his love for preaching. To my amazement, he would often chant for me every liturgical composition that I would sing, as well as the hundreds of choral compositions that made up our choir repertoire for the year.

Together, we tempered the southern Baptist style of preaching he came with to bring it in line with the sensibilities of our Toronto congregation. We collaborated on a new memorial service, carefully balancing the roles of music and speaking to achieve more spirituality and meaning. We cooperated to ensure the service moved at an appropriate tempo. At times before Musaf, Rabbi Saltzman would apologize in advance, because he felt that his sermon might be too long, and affect the balance of the service. My answer was always the same: time doesn’t affect your impact; your content and delivery does. His sermons were so inspiring that this was true.

Many times after officiating at a Shabbat or Yom Tov service, or after officiating at a wedding or funeral, we would embrace, recognizing that we had merged our talents to create something special for our congregants, as well as for ourselves. Listening to Rabbi Saltzman preach inspired me to try to reach my potential as a Chazzan.

Rabbi Saltzman influenced me not only in my role as Cantor but also in my role as Hebrew School Principal. I was in awe of his brilliant mind. The depth of his knowledge both in Jewish sources, as well as in the arts and sciences, mesmerized me. Although I was a Yeshiva student through the Graduate School level, Rabbi Saltzman taught me how to think and analyze text and commentaries critically. I became a better student because of him, and subsequently, I believe a better educator.

Our personal and professional relationship only grew and flourished. How many Cantors would be able to say that their relationship to their Rabbi was one of admiration, love and respect? Even more so, how many Rabbis would say the same about their Cantor? With Rabbi Saltzman, I know it was mutual. We had a relationship that was very rare among Rabbis and Cantors. It was 20 years of true professional harmony.

It seems almost inconceivable that almost a year has passed since I stood at Rabbi Salzman’s bedside early Monday morning, September 15th, 2014, as he took his last breath. In the days that followed, all of us were shocked and devastated by the tragic loss. I was asked to participate in the running of the High Holiday services. I was very apprehensive about doing so, but I felt that I owed it to Rabbi Saltzman to try to maintain the level of service that we had worked together to provide for 20 years.
On the second day of Rosh Hashanah, we read about “Akedat Yitzchak”, the binding of Isaac. In describing Abraham and Isaac, the text reads, “Vayeilchu Shneihem Yachdav” – they both walked together. Rashi explains that this means they walked with “Lev Shaveh”, equal hearts. The phrase speaks to the depth of the relationship and the commonality of purpose and objective. So it was with Rabbi Saltzman and me. We walked together. I think of and miss my teacher and friend every day.

May the soul of Harav Shalom ben Tzvi Eliyahu v’Rachel rest in peace and may his memory be a blessing for all of us.